Where are you from!

By my rough count, I was asked this question about 300 times during our 3 years in China: "Ni shi na guoren?" (more literally, but clumsily, you are which country-person?)

By the halfway mark, I grew tired of saying "Wo shi meiguoren," (I'm American.) I started responding with "Ni juede ne?" (roughly, Where do you think?)

After the chuckles, my Chinese questioners would invariably offer this litany of guesses: French! German! English! Australian! Scandinavian! Canadian!  No, no, no, no, no, no. I can count on one hand the number of times people finally got around to guessing American! before they shrugged and ran out of guesses.

Americans grow used to being quickly identifiable, as tourists in western Europe, for example. So in China, there is a curious kind of relief to be so anonymous, to be free of the obligation of being the standard bearer and explainer of all things American.

But why? Why did no one ever guess my nationality? I finally came up with a few theories. 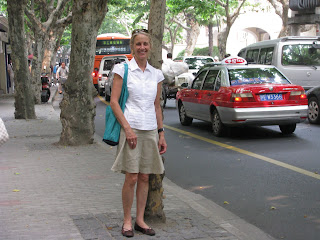 First, there isn't an overwhelming number of Americans among the westerners in China. Sure, there are lots, but there are lots of French, Germans, English, Australians, and all the rest, too.  It's not the first thing that pops into one's mind.

Second, I don't quite fit the body type of an American tourist, which is, frankly, rather fat. So the questioner can quickly dismiss the obvious and move on.

Third, just as it takes westerners a long time to distinguish the Chinese northerners from the southerners, it takes a while for Chinese to pick up on clues of facial features, or dress, or shoes, or gait of different kinds of westerners. My recent relatives are from Czechoslovakia, which doesn't make me an easy guess.

In Beijing two weeks ago, the question came up again from 3 young women I ran into for the first time. I asked, "Ni juede ne?" Two giggled and didn't want to hazard a guess. The third stood very close to me, looked straight into my face, and studied it from several different angles. Then she announced, with confidence, "Meiguoren!" American!  I don't know how she came up with it.
Posted by Deb Fallows at 1:53 PM

Email ThisBlogThis!Share to TwitterShare to FacebookShare to Pinterest
Labels: meiguoren, nationality. "Where are you from?", shanghai